WE LOVE OUR COMMUNITY!
We strive to be leaders on and off the court... 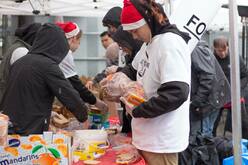 Every year the Britannia Bruins find time to contribute to the Downtown Eastside pop-up Street Store in Vancouver.  What starting out as a hot chocolate stand has morphed into lunched bags of sandwiches, fruits, water and so much more!  Our students help set up, run stations under tents of clothing, socks, toiletry kits, toys, etc.  We would like to thank all of our community partners that help contribute to make this event larger every year:  Yours City Sports, Fairmont Waterfront, Sunrise Market. 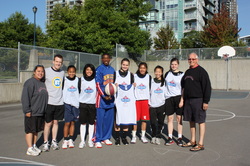 Six of our Lady Bruins took to the courts at David Lam Park bright and early at 6:30am on a summer Friday morning.  Aired LIVE on City TV's Breakfast Television segment with host Greg Harper, the girls interacted with Globetrotters' legend, Anthony "Buckets" Blakes, as he twirled and whirled the infamous red, blue and white coloured ball in seven segment clips over 2.5 hours in promotion for the upcoming NBA Jam Session on the weekend.  Several Britannia players will participate as volunteers over the two day fun-filled family event.  Thank you to NBA Canada, City TV and the Globetrotters for this great opportunity to meet and hang out with Buckets.  He is a truly inspiration player who not only shared his talents but his insights and stories on playing at the next level. 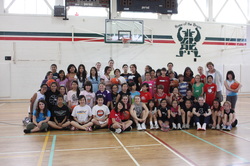 In partnership with the Vancouver Girls Basketball Association, Basketball BC and ProMotion Plus, sixteen of our Lady Bruins were trained and certified as NCCP Community Coaches over the 2010 Christmas Break.  Taking their newly learned skills, Bruin players stormed into our HUB elementary schools and ran afterschool basketball sessions for over 65 at-risk kids which included skills development, healthy eating living style, and jamboree play.  Attending our our finale jam session were 45 girls who were treated to a 3 hour session, pizza, juices and special guests.  A big thanks to Coach Cheryl Jean-Paul and her Trinity Western Womens Program for crossing over two bridges to help run our finale! 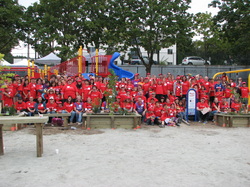 Over 50 Britannia Secondary students, including both our Bruins Junior and Senior Girls basketball players, came out to support this great cause!  Our girls were involved all summer long with wood cutouts for the new fence, running a Kid Zone area for the wee ones, building benches, digging footing holes and much much more!  As a result, a 2,520 square-foot playground featuring a tire swing, a 360 degree spiral Slide and a climbing wall was constructed within 8 hours.  Thank you to Kaboom and our community for donating the resources and time to keep our youth physically active! 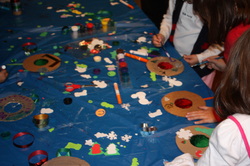 KidZone is our infamous "travelling craft stations" that we bring to all our community events such as HIPPY Graduation (Home Instruction for Parents of Preschool Youngsters), CAPC Family Conference
(Community Access Programme for Children), the annual Britannia craft fair and our Parent Child Mother Goose picnics. 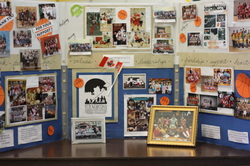 Most of our Britannia Bruins touched their first basketball at Strathcona Community Centre.  Every year in June, in partnership with the Vancouver Sunrise Rotary Club, Strathcona hosts a Hoop-A-Thon Fundraiser to raise money for its year round program for at-risk youth.  50 young players are placed in teams of 5 with one minute to make as many free throws as possible.  Pledges can be donated as a flat amount or by $ per free throw.  To donate, contact Ron Suzuki at 604-713-1838 or by email at ron.suzuki@vancouver.ca.


To find out more about the 400+ children who play at Strathcona CC every weekend, read Howard Tsumura's Province article here. 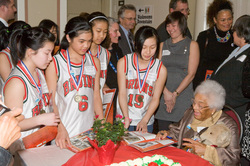 On March 8th, 2010, Commissioner Loretta Woodcock honoured 12 remarkable Vancouver women on International Women's Day.  Six of our Junior Bruins were on hand to present these women with their awards.  One of the highlights include meeting Britannia Alum, Barbara Howard, who was honoured for her achievements on the track as well as being the first black woman athlete to represent Canada in international competition!  Barbara was the first person from a visible minority to be hired as a teacher by the Vancouver School Board.

To find out more about these remarkable women, visit the City of Vancouver's website. 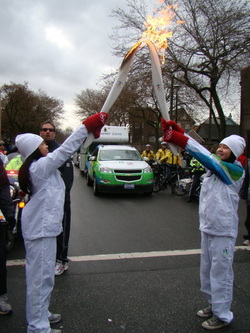 At the same time, the Britannia Bruins Junior Girls were taking on the Kitsilano Blue Demons in the 2010 City Championship Finals, the City of Vancouver was getting ready to host its largest international event.

Immediately following their win at the City Championships, our Junior Bruins were notified that two of their own teammates would have the honour of carrying the Olympic Torch in their own neighbourhood!

Ashley dela Cruz Yip and Kini Do were thrilled to be selected.  Both ran a 100m stretch in the Strathcona neighbourhood, following Ron Suzuki's run past his Strathcona Community Centre.

Britannia players lined up along the streets to cheer on their teammates on this incredible journey!